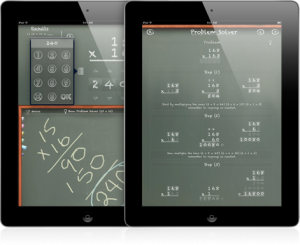 How to choose a good iPad Math App.

There are numerous math apps for the iPad.  How do you decide which one to buy?  If you ask my kids which app they like they would say “Rocket Math”.  While Rocket math is a good app it doesn’t always line up with my goals for them and math.

For instance my son is working on memorizing the multiplication facts.  When given the chance to play my son of course chooses easy math targets so he can collect more money and build a better rocket.  The rocket then becomes the object of the game for him not learning math facts.  While this does get him interested, it is not necessarily the best and quickest way for him to learn his math facts.

It is for this reason I decided on the iPad Math App Math Board.  Instead of using a math App to help my son learn, I decided to use Math Board to quiz him.  One of the key features I looked for was the ability to quiz on only one multiplication family.  For instance if my son needs help on the 7x’s tables then I can select an option to ensure that 7 is included in every quiz question.  While the cost at $4.99 seemed a little high you can try out the Addition only Math Board App for free.  My one complaint is that there are occasional messages about buying other apps even though I have the full version.  Other then that the apps is great.  One other feature that I try and shy away from with math apps is multiple choice.