My first impressions on using the iPad for homeschooling.

Hardware
The first thing you notice about the iPad is how thin it is. It almost makes it hard to hold like you would a book. I opted not to get the apple cover because i want something that covers the whole tablet I think that was a wise choice but that leaves me without a protective cover right now. The cameras are almost worthless. The pictures may look better on a smaller screen but on the iPad they do not look good.
After I synced the iPad with a few apps I sat down to look at a book with my kids gathered around. We decided to do a read aloud book. It was hard to hear even with the volume all the way up. I found that if I put my hand flat behind the speaker that the sound was much better. Hopefully a case will help with this.

Another thing I noticed about the design is that you really have a hard time determining which side is up. We were playing with the photo booth app which my kids love and we couldn’t figure out why a finger kept getting in the picture. Then we realized that the camera was at the bottom. You also can’t see the buttons on the side very well. Another thing I noticed was that the “mute” button really doesn’t mute everything like you would think.

So far after three evenings I have not charged the iPad yet. The battery indicator seemed to start going down right away but I am sure there is still a lot of juice left. Also I found out that my desktop all in one pc will not charge while connected. I figured this is due to The computer being more like a laptop since it is an all in one Sony.
Software
Not much is different than the iphone here other than the larger screen size. I am trying to only install iPad apps for now. Google maps is not as useful since the WIFI only iPad does not have GPS. Same goes for other location based apps.

Have you been drooling about using an iPad for homeschooling? You can use winning an iPad as motivation for you family homeschool. 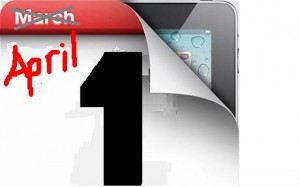 Twas the night before iPad 2…

Why you should be watching the iPad